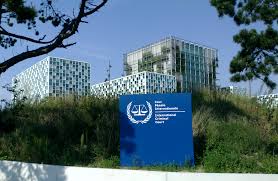 For those of us who have followed John Bolton's long, storied crusade against the United Nations, which he once called the "hopeless captive of Soviet manipulation and Third World radicalism" it should perhaps come as no surprise that now that he has been given perhaps his last chance at real power, he's set about destroying the ICC.

The ICC has long been a thorn in the side of Republicans, who seem convinced it is not an impartial, international court staffed by professional judges from all over the world, but rather an anti-US kangaroo court hell-bent on destroying the United States (and, of course, Israel). Bolton was behind the infamous "Hague Invasion Act," which left open the possibility of Special Forces invading the Netherlands to rescue CIA agents hauled up before the court. While most Americans have likely never heard of the court, it seems to keep Bolton up at night on a regular basis.

Now Bolton, who has always seemed pathologically incapable of understanding basic human psychology, seems to believe that a huge, showy war against the ICC (over the possible bringing of charges against US service people in the war in Afghanistan) is a great idea. He seems unaware that he is about to lift the ICC out of obscurity and thrust it to the front of the Resistance, just as Jeff Sessions plucked ICE from relative obscurity and dropped it like a bomb into the middle of the midterms.

Since the US is not a party to the Rome Statute creating the court, it has zero say over what the court does, and will have to resort to bullying other members into pulling out. Some of Bolton's genius ideas include leveling sanctions against witnesses or even judges involved in the court. Boy, is that going to be a good look. Cause nothing says "guilty" quite like bullying others into dropping support for a prosecutor that is investigating you. Just ask Donald Trump.

If you're interested in reading about the measured, legalistic investigation into war crimes in Afghanistan currently being brought about by Prosecutor Fatou Bensouda and her team of seasoned international lawyers, you can do so here. And here's a summary of the career of lawyer Bensouda, the African woman who is daring to hold the US accountable for its actions, as countless European, African and Asian countries have already been held to account for crimes spanning World War II to the war in Darfur.

So good luck to John Bolton in his quest to discredit Ms. Bensouda and the ICC. The more he rants and raves, the more the US government looks like it has something to hide, the more famous the ICC becomes. The headlines are already making Bolton sound like an unhinged dictator, as though he needed any help with that, right along side the government of Myanmar, who have at least managed to avoid threatening violence against the ICC in response to a court referral about the genocide in Myanmar. Meanwhile, Duterte in the Philippines is also trying to withdraw his country from the ICC. What wonderful company Bolton keeps.

One wonders why all the fuss? If these countries have done nothing wrong, why not simply let the process go forward?

But in all seriousness, with so many governments attacking the ICC at once, it's worth doing everything to raise the profile of the court in the hopes that public opinion can be used to protect it. Forcing other member states to withdraw from the Rome Statute, which would also withdraw their funding, will be a primary goal for Bolton. So far, most states are holding firm, but public opinion will be key to keeping support up in member state countries.

Nancy Pelosi was recently on the cover of Time Magazine for the first time, long after Mitch McConnell, but better late than never. Who will be on the cover next, John Bolton...or Fatou Bensouda?

Update: Conservative columnist Marc Thiessen has now published an article claiming that the US should support a policy of amnesty for war crimes, genocide and crimes against humanity for reasons of political expediency.
Posted by Statelessness at 7:12 AM